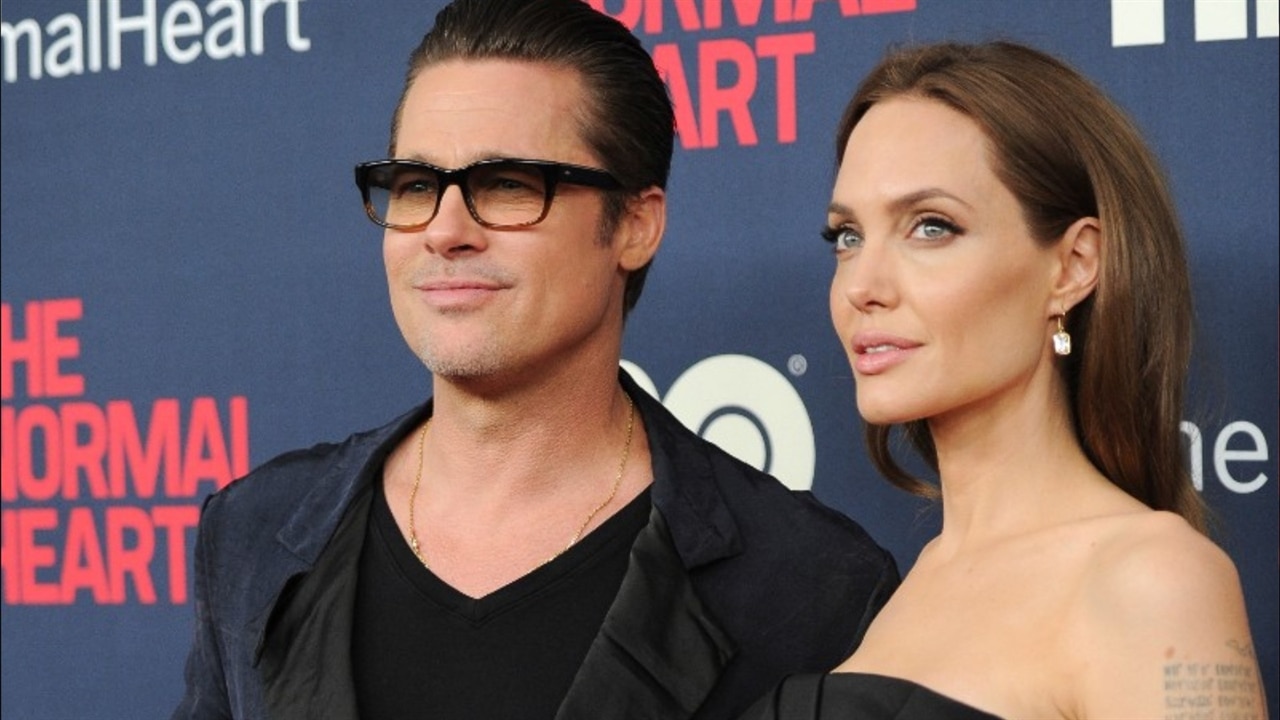 Brad Pitt‘s life couldn’t look any much more different right now from how it looked a year ago. To be sure, it’s been a circuitous journey from March to March.
In March 2016, Angelina Jolie had just been inked in Cambodia with a new tattoo that symbolically bound her to her husband of almost two years. The biggest threat to his livelihood was the epic, “career-ending” prank  George Clooneywas cooking up; he had been outed as the runner-up to David Crosby in the quest to father Melissa Etheridge‘s children 20 years ago; and Jennifer Garnerhad just thrown it way back in Vanity Fair, comparing her split from Ben Affleck to Pitt’s 2005 divorce from Jennifer Aniston.

Moreover, no one was all that interested, more than usual anyway, in Pitt’s whereabouts one year ago, figuring all was status quo for the busy father of six.

That’s a far cry from today, when we learned that the movie star has been holed up working dutifully on a sculpture at British artist Thomas Houseago‘s studio in Los Angeles, sometimes for hours on end.

Reportedly while listening to sad songs, like any normal person would who might still be suffering the effects of a painful breakup.

But as we all know now, just a year ago life was about to become the opposite of normal for the Oscar-nominated actor.

No one was the wiser as Pitt went about work as usual, shooting the spy thriller Allied with Marion Cotillard and Lizzie Caplan in England last April, fretting over U.S. and global politics like a lot of the rest of the world, and posing for a cover shoot for The New York Times‘ T Magazine that, in hindsight more than ever, co-starred his wedding ring front and center.
The magazine landed on doorsteps Sept. 11. On Sept. 19, Jolie filed for divorce.

And not only did she file for divorce. She asked for primary custody of their kids, which along with the split itself was the real jolt to those who thought of “Jolie-Pitt” as more than just a last name. 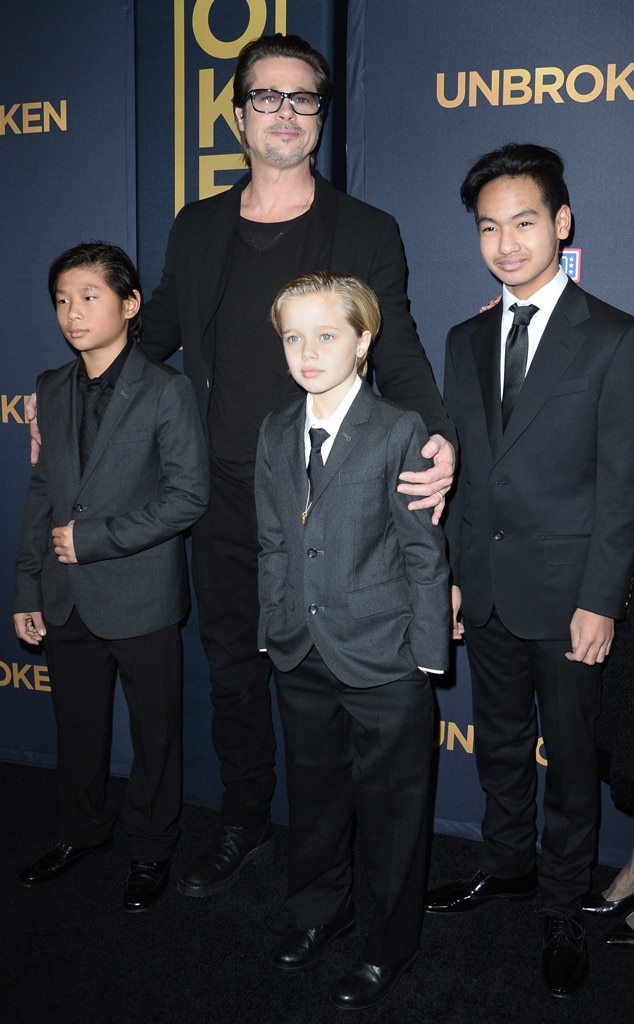 Within days, it turned out that the Los Angeles County Department of Children and Family Services and the FBI were investigating Pitt over some sort of confrontation between him and son Maddox (undisclosed by authorities, but details trickled out later) on a private jet flying from Europe to L.A. (hence the federal interest), and all of a sudden the curtain was pulled back on what was once assumed to be Brangelina’s blissful life.

As parents, at least, if not always with each other. (Shooting the depressing By the Sea could’ve left a mark on any couple, no matter how happy, really.) 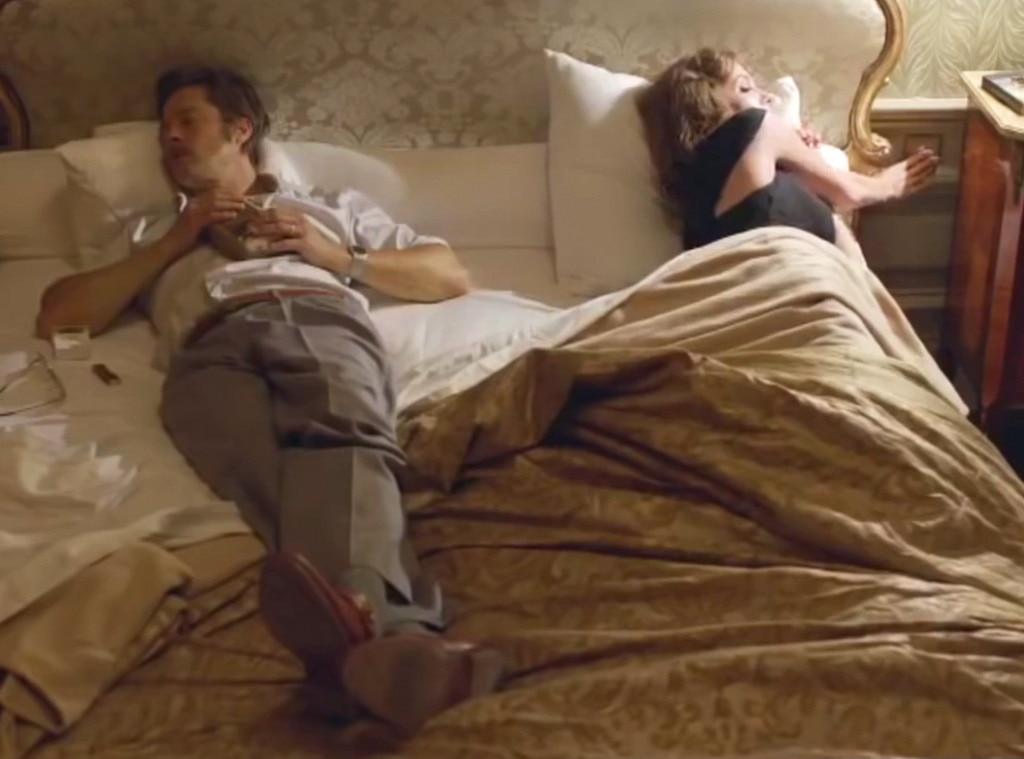 But all of a sudden Pitt—via his lawyer—had to start defending himself in court filings, as well as deal with the public embarrassment of more or less being called a questionable parent, and start to try to mend his relationship with the kids, particularly 15-year-old Maddox.

Jolie retreated to a rented home in Malibu with Maddox, Zahara, Shiloh, Pax, Knox and Vivienne, and Pitt stayed away. We were told that the actor, used to being a hands-on dad and “committed to giving them stability,” was “very upset” but hopeful that he and Jolie would work out their custody issues soon.

Pitt ended up skipping what would have been a hasty return to the spotlight (considering), the Sept. 28 premiere of the documentary Voyage of Time, which he narrated.

Meanwhile, he had chosen to ignore speculation that he and Marion Cotillard had a fling while shooting Allied, but the French actress, pregnant at the time with her and Guillaume Canet‘s second child together, felt compelled to explicitly remove herself from the narrative. “…to all the media and the haters who are quick to pass judgment, I sincerely wish you a swift recovery,” she wrote on Instagram. “Finally, I do very much wish that Angelina and Brad, both whom I deeply respect, will find peace in this very tumultuous moment.”

Though the authorities would eventually determine that there was no evidence of wrongdoing by Pitt on that plane, Jolie retained temporary sole custody of the kids, with Pitt granted monitored visitation with a therapist. He and Jolie also agreed to individual and family counseling sessions. Pitt had volunteered to submit to drug and alcohol testing, but the court didn’t require it.

Pitt only saw the kids twice (Maddox wasn’t present for the first visit)—for a total of about four hours—in the month-long span after Jolie filed for divorce. The FBI was still in “fact-finding mode” at the time, NBC News reported. On Oct. 19, Maddox reunited with his dad in the presence of a therapist, a source telling E! News that Jolie wanted their kids to be fully involved with both parents.

The last time the family of eight had been spotted all together was 10 weeks prior to the divorce filing, when Brad and Angie took their brood to pancake hot spot The Griddle Cafe in West Hollywood on Knox and Vivienne’s 8th birthday. 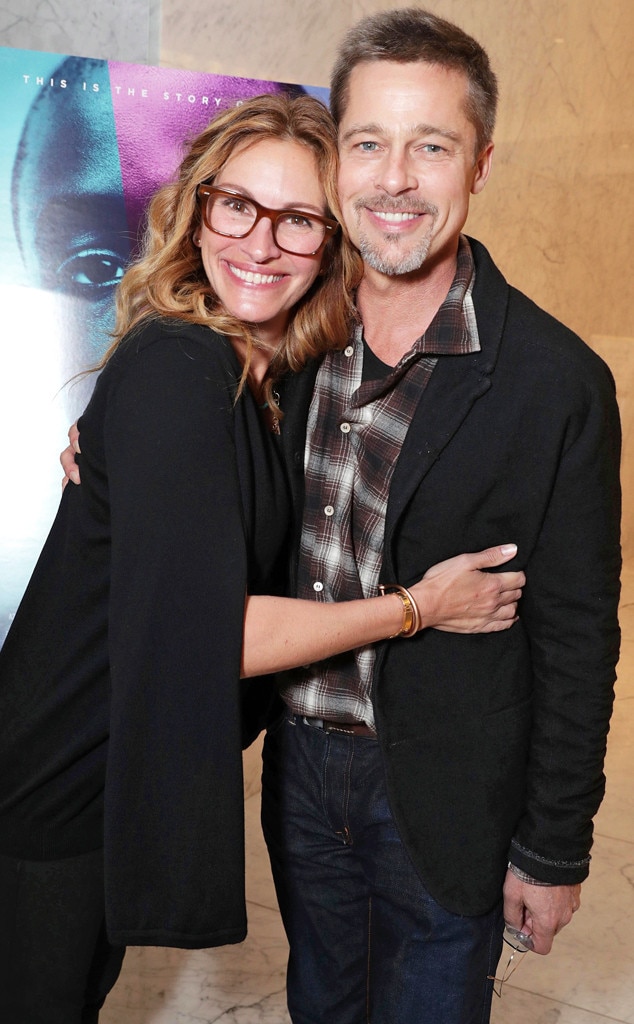 Jolie sightings with the kids were a rarity in October, but Pitt pretty much disappeared while the custody and legal issues were being sorted out—though a source told E! News that the actor had been spotted at Wolfgang Puck at Hotel Bel-Air in recent weeks, and would sometimes sit at the hotel bar, typically alone. Also toward the end of the month, the DCSF investigation was extended after a new accusation arose, requiring a closer look for any patterns of suspect behavior on Pitt’s part.

He reemerged in November, however, a few days after officially counter-filing for joint custody of the kids on Nov. 4 (though they had both signed off on the temporary arrangement that put the kids in Jolie’s custody full-time while they worked on a long-term deal).

First he co-hosted a screening of Moonlight with longtime pal Julia Roberts, the Plan B Entertainment co-founder understandably rather proud of the indie drama (and eventual Best Picture Oscar winner).

On Nov. 9, E! News confirmed that Pitt had been cleared in the family services investigation—the same night he attended an Allied fan event in Los Angeles and sat down for a film-centric Q&A for a Facebook Live stream. Asked if his hand hurt from signing so many autographs, he replied, “No, it’s really sweet. Everyone’s been very kind out here. It’s really nice to have the support.” 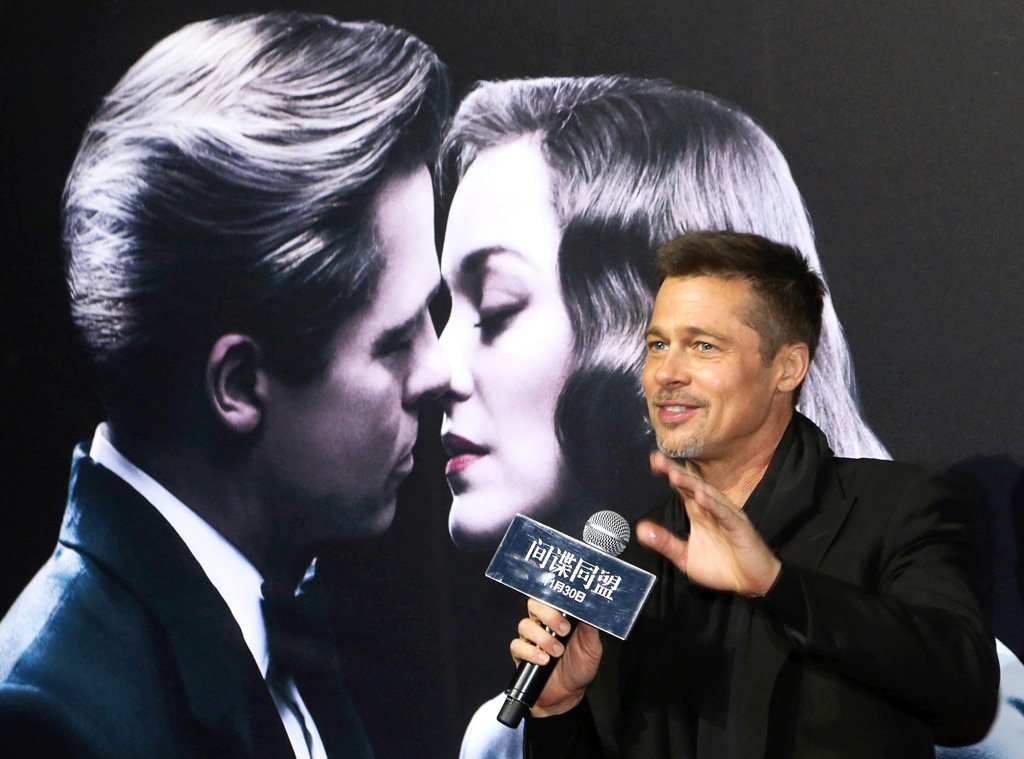 A couple of weeks later he took off to London for Allied‘s U.K. premiere. 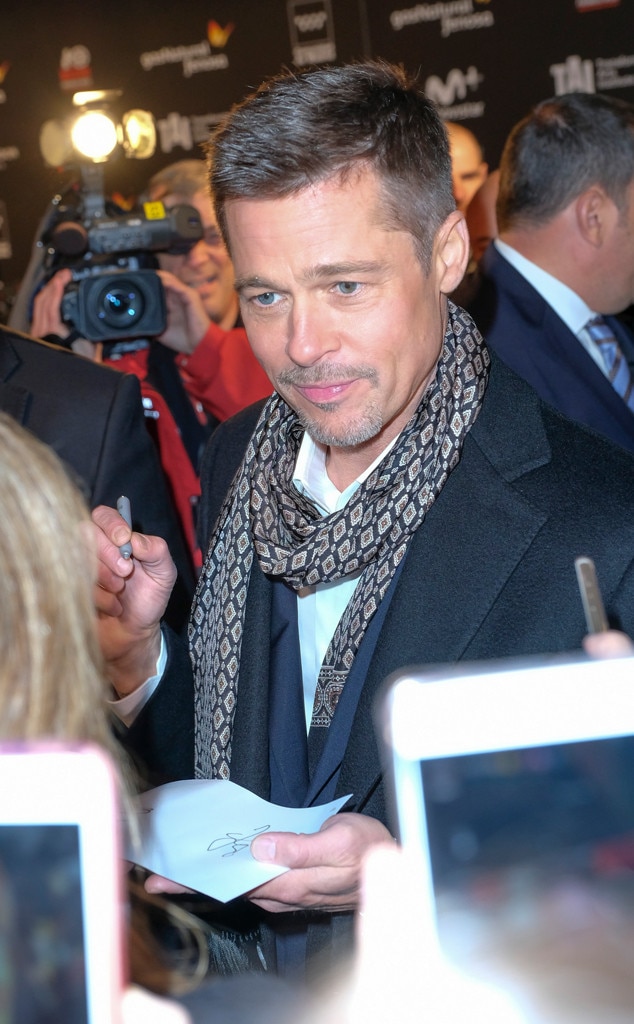 We heard that, while Jolie was in the States with the kids, Pitt spent Thanksgiving in France at the family’s Chateau Miraval, occupying himself with their local wine and olive oil business.

Not long after that rather lonesome-sounding holiday, Pitt’s legal team took action, filing paperwork requesting an emergency hearing to request that the court seal all documents and proceedings related to the custody case, tired of the family’s alleged dirty laundry being aired (purposely by Jolie, he claimed) for all to read about and maintaining that the publicity would only prove harmful to the kids in the long run.

The request for an emergency hearing was denied, and amid a flurry of filings the actress also demanded that Pitt undergo drug-testing four times a month if he wanted regular visitation with the kids.

Pitt did get to see the kids over the holidays to exchange Christmas gifts—and barely two weeks later, Jolie agreed to let their case be sealed, but not without charging in court documents that her ex was “terrified that the public will learn the truth.” 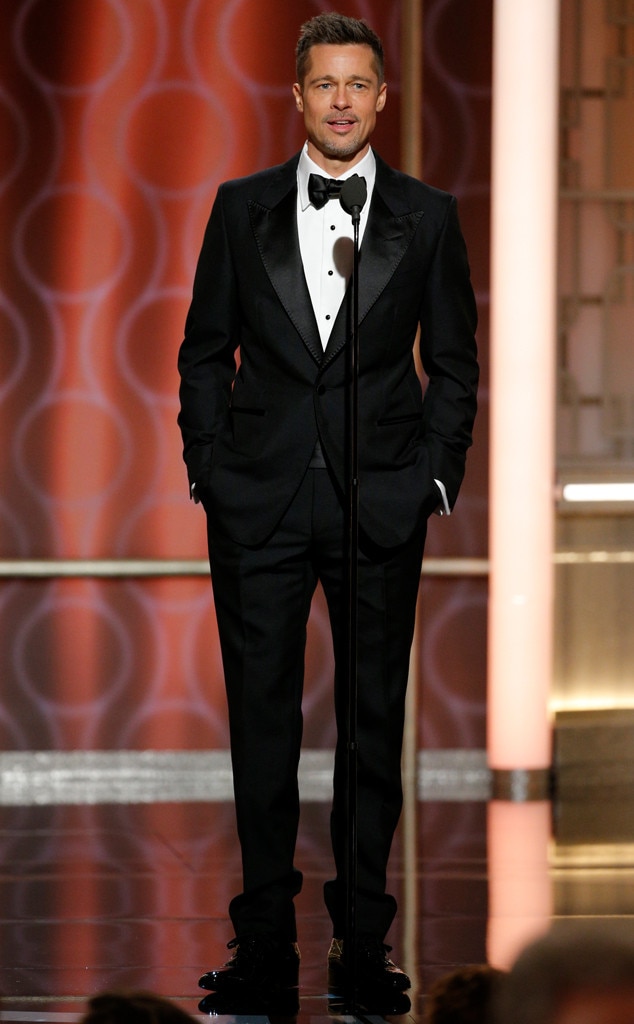 No wonder Pitt looked so touched when he emerged on stage at the Golden Globes on Jan. 8—in what was an entirely surprise appearance—to present Best Motion Picture, Drama, contender Moonlight and the crowd went wild.

Not that anyone was complaining about his appearance before, but he once again looked far younger than his 52 years, though maybe just on the skinny side of his normal self.

Apparently in good spirits, a week later he mingled with Sting, Chris Cornell and Zach Galifianakis at the ROCK4EB! fundraiser in L.A.; a few nights afterward he reportedly threw a private party in a room at Hotel Casa Del Mar in Santa Monica, toting the gold and white balloons out with him to give to the kids. 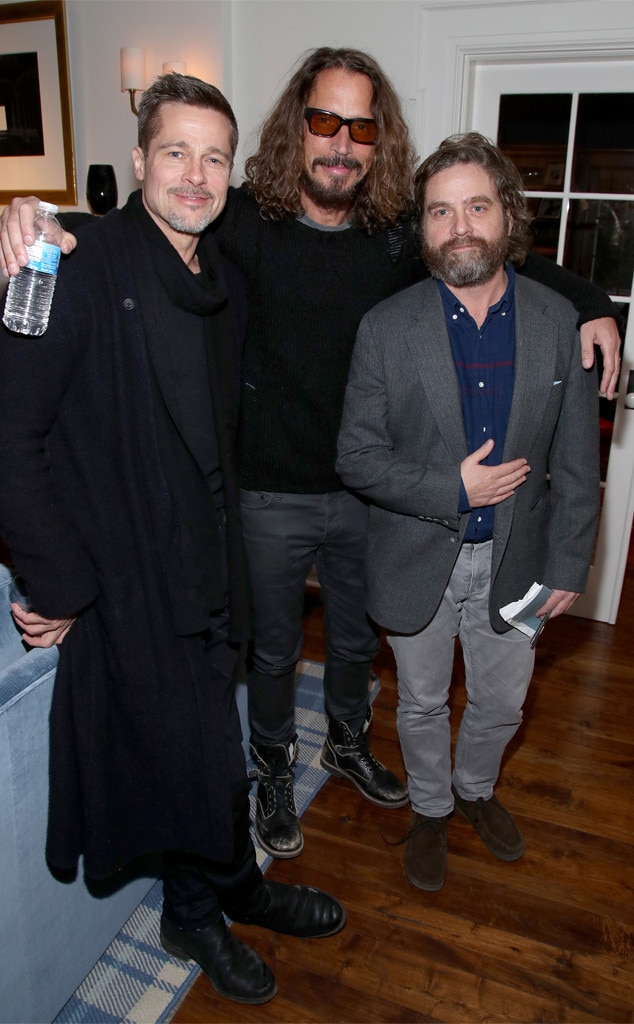 All the while, the custody-related headlines were getting a second wind: A report claimed he wanted the kids to enroll at a regular school in L.A., but Jolie resisted, preferring the bouncing from country to country lifestyle they were used to. Then a source denied to Entertainment Tonight a report that Pitt had gone on a whirlwind fancy rehab retreat. Pitt was also rumored to be hooking up with Kate Hudson—a story the actress’ brother, Oliver Hudson, had some fun with on social media.

In mid-February, Jolie personally commented for the first time about their split while she was doing press in Cambodia for her latest directorial effort, her assent that she still thought Pitt was a great dad preceded by an uncomfortably long pause.

It seemed as though Pitt’s side of the story—or at least a few like-minded, “at the end of the day we’re family” sort of remarks—would be forthcoming after that, but he has remained silent as he continues to adjust to life as a newly single (for the first time in more than 17 years) dad who has a lot less access to his kids than he would like, and still have to think about his public image.

Brad skipped the Oscars, ultimately basking in Moonlight‘s glow from afar, and for the most part, up until today—when he was photographed heading into the art studio—he has cagily managed to avoid the paparazzi while navigating L.A., where he’s remained to be close to the kids. He’s only been spotted a couple of times running errands and going to meetings in the Santa Monica area.

His inner circle is a small one, and while he maintains a “friendly” relationship with ex-wife Jennifer Aniston, recent communication with her hasn’t been the big reach-out-and-text-someone reunion it might have been reported as at first.

His next movie, War Machine, based on a nonfiction book about the politics and business behind U.S. involvement in conflict, is shot and due out sometime this year—but it doesn’t yet have a release date. Meaning, we don’t have any particular timetable of when to expect anything public from Brad Pitt.

Perhaps when he feels his sculpture is finished.