Image copyright: Getty Images (Kurt Cobain was 27 when he died in 1994)

The shoulder-length blond hair. The stubble. The youthful face with its permanently weary gaze.

Kurt Cobain is still instantly recognisable as one of the most iconic faces of the 1990s, and the most important musician of the grunge scene.

It is almost staggering to realise he would now be entering his sixth decade.

On the day the Nirvana singer would have turned 50, we look at why he is still influential today and the mark he made on the world of music. 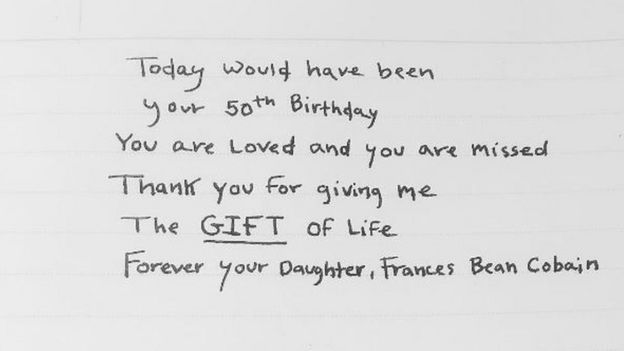 His daughter Frances Bean Cobain, who was not even two years old when he died, tweeted a happy birthday message to her father in the early hours of Monday.

Fans have also been tweeting their favourite quotes, with this one a particular favourite:

“If any of you in any way hate homosexuals, people of a different colour or women please do this one favour for us – don’t come to our shows and don’t buy our records.”

The band were ahead of their time in attitudes towards inclusivity

Kurt was outspoken on gay rights, homophobia and sexism. He said he wished he’d been gay, just to annoy homophobes, and often wore dresses to protest against sexism.

“Wearing a dress shows I can be as feminine as I want,” he told the LA Times, in a jab at the macho undercurrents he detested in rock. “I’m a heterosexual… big deal. But if I was a homosexual, it wouldn’t matter either.”

He admitted to spray-painting cars with “God is gay” and was once arrested for graffitiing by police in Aberdeen, Washington State. 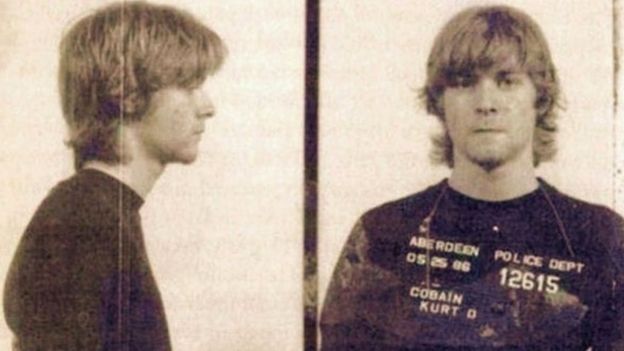 Image copyright: Aberdeen Police (Kurt was 19 when he was arrested by Aberdeen police)

The band came to represent Generation X but he had no time for apathy.

“I’m disgusted by my own and my generation’s apathy. I’m disgusted at what we allow to go on, by how spineless, lethargic and guilty we are of not standing up against racism, sexism and all those other ‘isms’ that the counterculture has been whining about for years while they sit and enforce those same attitudes every night on their televisions and in the magazines.” 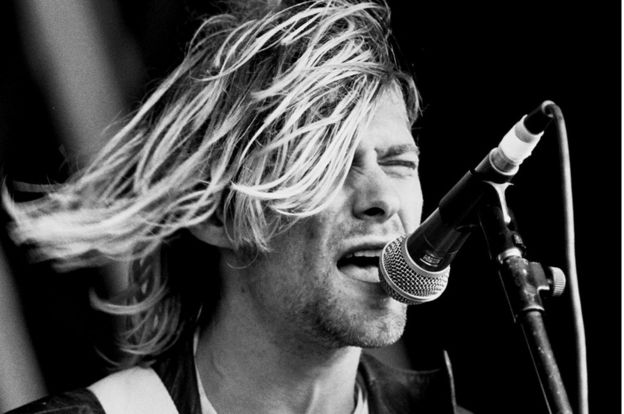 “What’s alternative? What’s counterculture? What’s cool? Who knows? Who cares? If chasing cool is important to you, you’re an idiot!”, Kurt said in a 1991 interview.

And, for someone who came to be seen as a spokesperson for his generation, Kurt rejected any hype about their so-called “overnight” success (actually five years in the making).

“I’m not into ambition or salesmanship, we’re not some new trend. We never meant or tried to be cool, or be a ‘buzz’ band. It never even entered our minds.”

The music he wrote inspired generations 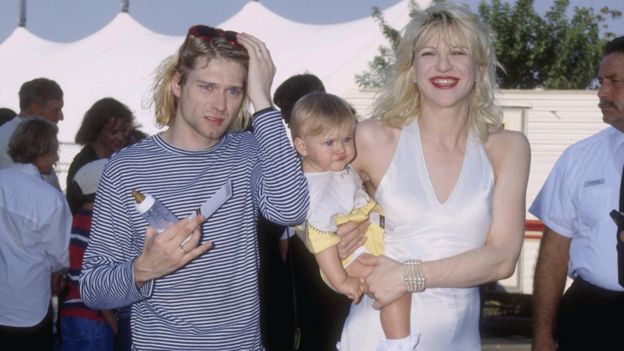 Image copyright: Alamy (Frances Bean was not yet two when her father Kurt died)

It would be easier to list who Nirvana didn’t influence than who they did. Lana Del Rey, Blink-182, Justin Timberlake and Jay Z have all quoted Nirvana songs in their own lyrics, while Weezer once played an entire concert of Nirvana covers.

“Cobain changed the course of where the music went,” said Vernon Reid of rock band Living Colour. “There are certain people where you can see the axis of musical history twisting on them: Hendrix was pivotal, Prince was pivotal, Cobain was pivotal.”

Nirvana launched a million garage bands – the simple barre chords that open Smells Like Teen Spirit are the first song many guitarists learn – and helped foster a do-it-yourself attitude that now permeates everything from indie to pop and grime.

They introduced legions of fans to alternative music, pushing associated acts like Soundgarden, Pearl Jam and Kurt’s favourites The Pixies into the mainstream.

But speaking in 1991, Kurt downplayed his own musical talents.

“I, or we as a band, never really copied anybody or spent time learning other people’s songs. We were never good enough or had the patience to do it! So we put that energy into putting our own stuff together. We’re from the learn-­as­-you-­play school. We’re still in it.”

His performances were legendary 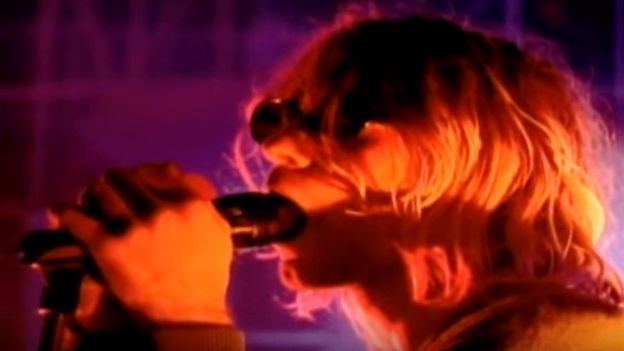 (In his performance on Top of the Pops, at one point he sang with the microphone in his mouth)

Anyone lucky enough to have seen Nirvana play live would attest to the power of their live performances.

But some became remembered for other reasons.

When they played at Top of the Pops in 1991, the band were advised to sing live over a pre-recorded backing track. Nirvana decided they’d rather not, thanks all the same.

Instead, Kurt sang Smells Like Teen Spirit in a much lower voice, changed some of the lyrics and barely touched his guitar. The rest of the band performed in a similar vein, emphasising the fact they were very much not playing it live. 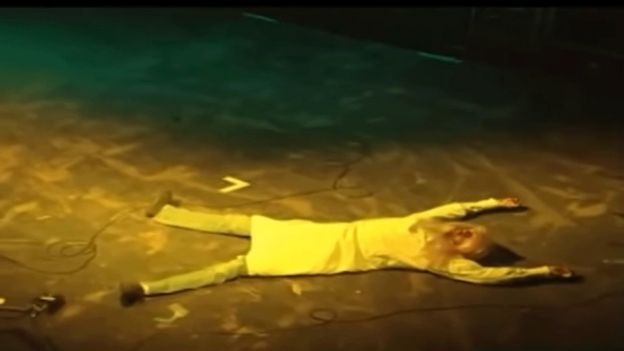 Similarly striking was their appearance at the 1992 Reading Festival.

It was August bank holiday weekend and rumours had been circulating that Kurt and his wife Courtney Love, who’d just given birth to Frances Bean, were deeply unwell. In response, he came on stage in a wheelchair, wearing a hospital gown and a blond wig, sticking two fingers up at the music press.

It was Nirvana’s first time headlining the festival – but it would also be their last UK performance.

Dave Grohl said they had barely rehearsed but, somehow, that didn’t matter. 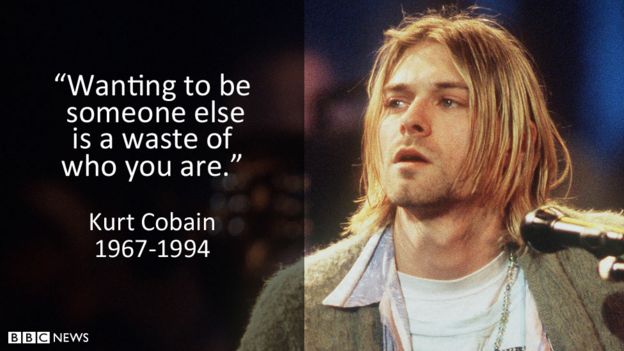 Given the cult that has grown around Nirvana’s music and Kurt’s death, it’s easy to forget the star was unusually eloquent and passionate.

Dig out some archive interviews and his quotes sound surprisingly contemporary. Others, though, seem chilling with the benefit of hindsight. 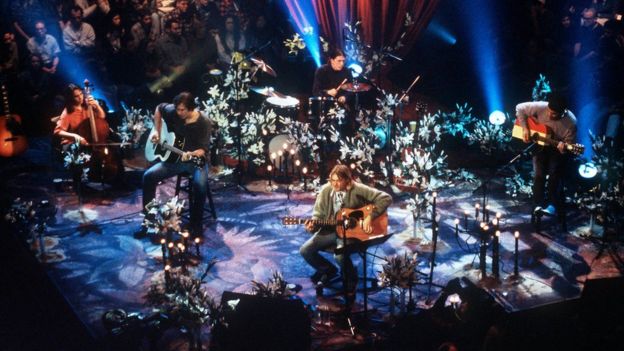 Kurt tore himself to shreds worrying about fame and selling out.

In Utero, the follow-up to Nevermind, was deliberately abrasive while Nirvana often refused to play Smells Like Teen Spirit in concert. But their MTV Unplugged concert – released as an album after Kurt’s death – showed how the band could have survived in the longer term.

It’s unusual for a live record – in that it sidesteps the band’s hits in favour of more obscure songs and a slate of covers very few people had ever heard of (including three tunes by The Meat Puppets). But it is beautifully, nakedly emotional. Kurt performed the set in one unbroken take, surrounded by lilies (the flowers of death) hunched over in his oversized cardigan. His fingers sometimes fumbled on the unfamiliar acoustic guitar, but that only heightened the frailty of his lyrics.

If the band needed to find a way out of the corner they’d backed themselves into, this was it. Like Dylan going electric, but in reverse.

“I’ll never forget after we did Unplugged, how happy Kurt was – he was so happy,” bassist Krist Novoselic told the BBC’s Seven Ages of Rock programme. “He was really really happy after that. He was relieved, and we pulled it off.”

The star himself had previously hinted this was a path he wanted to explore.

“It might be nice to start playing acoustic guitar and be thought of as a singer and a songwriter, rather than a grunge rocker because then I might be able to take advantage of that when I’m older,” he told a French journalist in 1993.

“I could sit down on a chair and play acoustic guitar like Johnny Cash or something, and it won’t be a big joke.”