It turns out laughter really is the best medicine.Ellen DeGeneres welcomed Claire Danes on her eponymous daytime talk show Tuesday, but before she sat down to chat with the Homeland actress, she had an announcement to make. “I have something to show you—it’s that right here. Can you see it?” DeGeneres asked, directing the camera to show her splint. “I broke my finger. I know what you’re thinking: ‘How can you host a show without the tip of my ring finger?’ I am not gonna let this thing beat me. I am not.”
“So, you know how in gymnastics when you do a one-handed cartwheel and you have to spread the weight evenly between all your fingers? Well, I had two glasses of wine and fell into a door,” DeGeneres continued, adding that she and wife Portia De Rossi “were coming home from a dinner party” and were “almost at the front door” when the accident occurred. “The dogs were so excited to see us and I caught the lip of the top step. I was a foot away from the door and I fell into the door and it did something to my finger, I knew something was wrong.”To her audience’s surprise, DeGeneres showed a photo of her dislocated finger. “I should have warned you. Don’t look at that. If you’re squeamish, don’t look at it,” she told them. “I’m sorry.”
“My first thought was, ‘No big deal; Obama Care will cover this.’ So, Portia drove me to the hospital—to the emergency room—and when I got there, of course, the receptionist had so many things for me to sign: a picture for her nephew, a T-shirt for her,” DeGeneres joked. “No, they were wonderful. UCLA, thank you so much…There was a lot of people who were helpful, but Tammy, thank you so much. Tammy was my nurse who was taking care of me.” DeGeneres then showed an X-ray of her finger. “Don’t worry—this isn’t as bad as the last one I showed you,” she said. On second thought, she said, “Maybe it is. I was wrong. It’s worse. I’m so sorry.”Fortunately, DeGeneres didn’t break her finger after all. 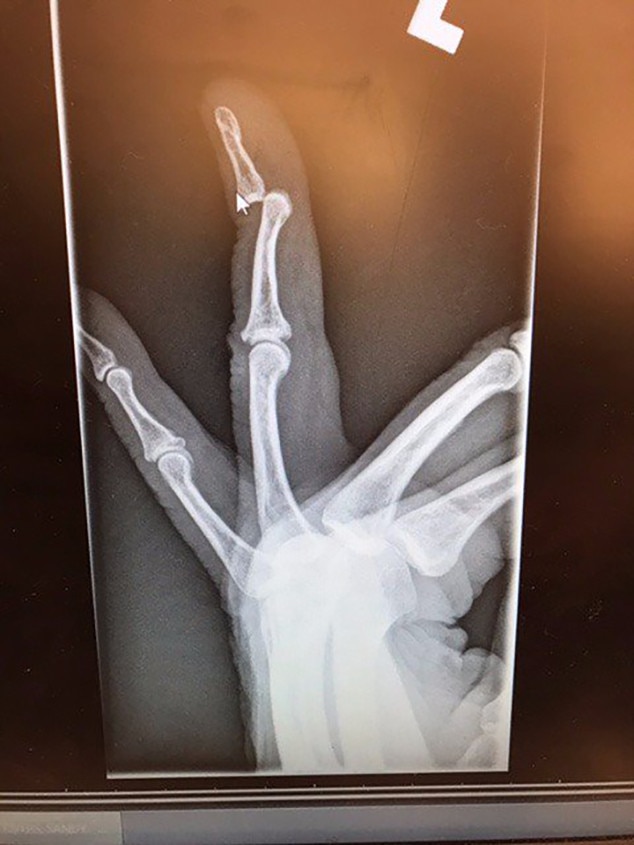 “I dislocated my finger. That’s what they call it, which is an incorrect term because I knew where it was located. It was just wrongly located is what it was,” she joked. “So, do you know what they do when you dislocate your finger? It’s very technical. What they do is they take the part that’s dislocated and then they just snap it right back into place. Yeah, you can see why they have to go to eight years of medical school. Before they did it, I was in incredible pain and Tammy said, ‘Do you want a shot?’ And I said, ‘No, I had two glasses of wine—that’s what got me into this mess in the first place, Tammy.’ She meant a shot to numb my finger. She said, ‘You’re gonna feel a little prick.’ This is a daytime show—you make up your own joke there.” 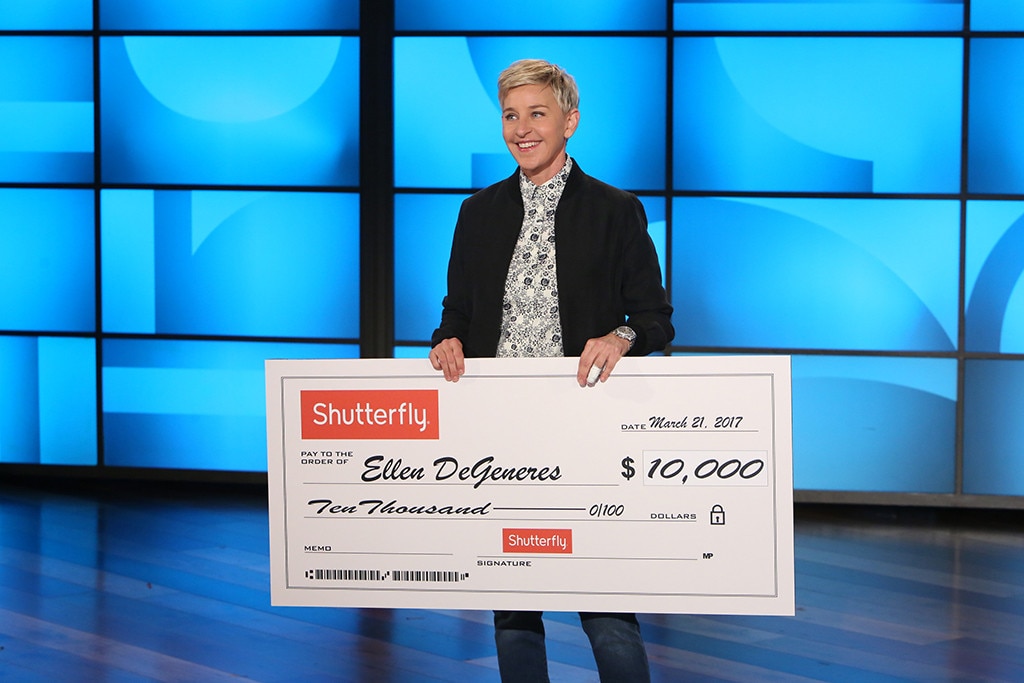 “She said, ‘You’re going to feel a little prick and then sme burning.’ There was burning, all right,” DeGeneres recalled. “So, the stuff—whatever that numbs you—they should make that different, because oh my God. Burning followed by cursing is what happened. Think of any curse word—just think of any curse word—and I said that. I invented three new ones, actually.””It was a hard weekend for me, but I put on a brave face and I made it through. Luckily, my friends from Shutterfly heard my story and they love helping people out in need, so they wanted to present me with this check for $10,000, which is so nice,” she said. “Thank you so much. I’m no hero, but I deserve this. I’m gonna watch my steps very carefully as I dance.”
After taking her seat, DeGeneres shared a few more details from her hospital visit. “When I was leaving, I went through the emergency room and tons of people—the people who were conscious, anyway—were looking at me. There was this one cute couple…They came up to me and he was like, ‘Can we get a selfie with you?’ I was like, ‘Yeah, sure.’ It’s like 12:30 now. So, he and his girlfriend are sitting there getting a selfie and he says, ‘I hope you’re going to be OK.’ And I said, ‘I just dislocated my finger. What happened to you?’ And he goes, ‘I got hit by a bus’… I said, ‘Are you OK?’ He said, ‘Yeah, I think so…I don’t know. I may have a concussion.'””He won,” DeGeneres told Stephen “tWitch” Boss. “He won the story.”Source: http://www.eonline.com/
LEAVE A REPLY