Uber put city officials on blacklists, then prevented them from hailing rides

It’s called Greyball: a secret method used by Uber to track and evade unfriendly authorities in cities around the world.

The ride-hailing service won’t confirm whether it used that clandestine tool to deceive regulatory and law enforcement authorities in Canadian cities.

Still, Uber has publicly acknowledged that it used Greyball in major cities across the world including Paris, Boston, and Las Vegas.

Uber’s tactics, first reported by the New York Times late last week, involved using Greyball to identify local authorities and prevent them from ordering rides. The goal, according to the Times, was to stymie official efforts to investigate Uber. Such investigations have been especially common in jurisdictions where the ride-hailing app’s low-cost UberX service was banned or restricted.

To achieve that goal, Uber analyzed geographic data, credit card information, social media profiles, and more to identify likely officials and inspectors in cities like Portland, Ore., and assign them “Greyball” status. In other words, Uber used Greyball to watch the watchers.

If those users tried to order a ride using the Uber app, they were presented with a fake version of the program — complete with a map of fake cars driving around the city. If drivers accidentally picked up a “greyballed” rider, Uber called them and told them to end the trip, according to the New York Times. The Times report was based on information provided by unnamed current and former Uber employees.

Uber’s Canadian office offered no comment in response to requests from CBC News.

“The City of Toronto was successful in undertaking enforcement prior to Uber being licensed,” said Tracey Cook, executive director of municipal licensing and standards for the City of Toronto, who added that the city’s July 2016 bylaw regulating Uber and other private transportation companies would prohibit Uber “from obstructing information with regard to the accounts.”

Montreal authorities have no proof that Greyball was ever used by Uber in that city, said Renaud Beauchemin, a spokesperson for the Bureau du taxi de Montreal.

“Using this software or a similar technology could be considered as obstruction to the authorities,” he said.

Through a spokesperson, the city of Edmonton said it has “no knowledge of the use of this technology by Uber from an enforcement perspective.”

How Uber sees it

In a statement to the Times, Uber described Greyball as a way to deny rides to users who violate the company’s terms of service, including “people aiming to physically harm drivers, competitors looking to disrupt our operations, or opponents who collude with officials on secret ‘stings’ meant to entrap drivers.”

Uber’s use of Greyball was approved by the company’s legal department, according to the report, and continues to be used “predominantly outside the United States.” 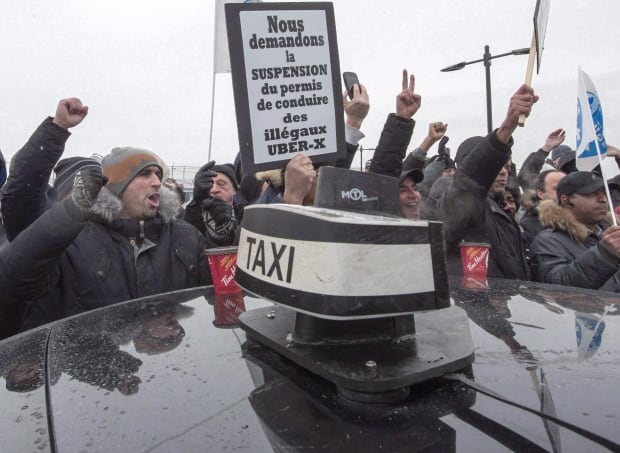 Taxi drivers have led campaigns against Uber in a number of Canadian cities, including Montreal. (Ryan Remiorz/Canadian Press)

Uber, an emerging global transportation giant valued at as much as $70 billion US, has been accused using of surreptitious tactics to undermine opposition to its business model before.

In a blog post Tuesday,  Uber CEO Travis Kalanick said he would hire a chief operating officer to “partner with me to write the next chapter in our journey.” That decision comes after Uber found received negative press attention on several fronts during the first few months of the year. 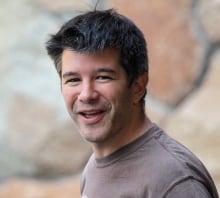 A widely covered Feb. 19 blog post by Susan Fowler, a former engineer with the company, described a persistent atmosphere of sexual harassment and maltreatment of female employees at the company, and said Uber’s human resources department failed to act on her complaints.

Later that month, Kalanick apologized after a dashcam video obtained by Bloomberg News showed him arguing with driver Fawzi Kamel when the driver complained about Uber’s business practices.

Also in February, Google’s parent company Alphabet filed a lawsuit against Uber. The suit alleged that a former employee of Alphabet’s self-driving car subsidiary Waymo stole laser-scanning technology from Waymo and used it to start his own self-driving car firm called Otto, which was later acquired by Uber.

In late January, an online campaign that called for Uber users to delete their accounts led more than 200,000 users to do just that, according to a New York Times report.

The campaign, #DeleteUber, gained traction on social media after Uber maintained regular prices for trips to a New York airport where taxi drivers had temporarily suspended pickups to protest the Trump administration’s initial travel ban. Critics suggested Uber’s decision not to implement “surge pricing” — its usual practice when rides are scarce — was tantamount to strikebreaking for profit.

Shortly after that, Kalanick quit Trump’s business advisory council, telling employees that his presence on the panel was “misinterpreted” as an endorsement of Trump’s agenda.